How Little I Knew About Shibari — Memoirs from Moscow Knot 2013 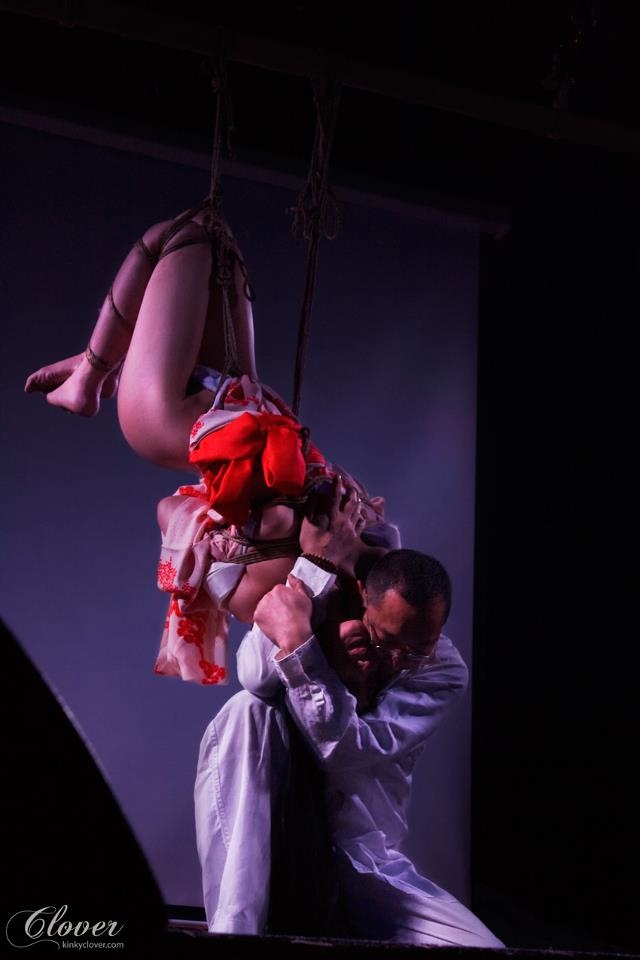 “How little I knew about shibari.”

So I said to myself when I listened to Hedwig‘s course last year in London. So I said to myself again this year. Every time I meet my European friends, I am saddened by realising how little I knew, but also thrilled by how much there is to learn.

Moscow Knot: International Bondage Party is organised by Vlada, Falco, and Torquemada. A three-day festival with 8 pairs of local performers and 8 pairs of foreign performers, workshop, interview, and party, is a huge event, especially for a team who organises an international event for the first time.

The spotlight of the event is undoubtedly on Naka Akira. Under influence of Nureki Chimuo, he practices, in my opinion, one of the older style of shibari. He uses no carabiners, and instead spontaneously ties attachment points on a bamboo pole. He does not connect ropes, but always start from a new point after finishing using one rope. But how do we learn to understand and appreciate such a style? The seme-nawa course offered by Riccardo Wildties, a big fan of Naka-san, turned out to be a fitting introduction — the choices of not using certain techniques are in fact closely tied with the aesthetics of Naka-style. Tying to a bamboo allows for flexibility, while not connecting ropes allows the model, the rigger, and the audience, to pause between breaks.

Naka-san’s performances are usually slow but intense. He would completely apply one rope to the model’s body, step back, observe the model in agony, before applying the next rope to push her a bit further. In my opinion, it is like a spanking session that starts in a slow pace and gradually intensifies to stimulate endorphin — it turn out that ropes and whips do share something in common. Aren’t we used to say when we teach spanking that there is not one but many kinds of “pain”? In the course, Riccardo pinched Redsabbath out of blue and “ouch!” she shouted. Riccardo commented: “It hurts, but it’s not beautiful. What we want is ‘beautiful suffering.'” He then started tying Redsabbath, one ope after another, as we watch her gradually suspended and bloomed like a flower. “Now, this is beautiful.” Riccardo said.

That’s the moment when I again said to myself: how little did I know about shibari.

Naka-san’s performance appears to be technically as simple as a performance can be. Yet it is so touching that the audience could not help sobbing. Dave was very moved by the performance. “How much confidence does it take to do something so simple, and yet so beautiful? If I keep tying for ten more years, no, if I can still tie after ten years, can I tie so well?”

Meanwhile, I was thinking “how many years is it going to take before people in Taiwan could appreciate this show?” It wasn’t long ago when the Japanese nawashi we invited was asked by the club owner to “tie the girl off stage and start right from the whipping.” How much have we improved since then?

Appreciation of art is an acquired ability. The ability of the a crowd to appreciate art is in proportion to the competence of their local artists. We have seen the west improving so quickly in the past decade, and I believe that a major contributing factor is due to the tradition of sharing and teaching in the western BDSM circle. Take the classes in Moscow Knot: Dave and Clover on ichinawa and partial suspension, Jack and Zahara on connection, body control, and intention, Riccardo and Redsabbath on seme-nawa, Stefano on suspension and sex, and Xanoo on hojojutsu… all these courses are more focused and specialised than any I have seen in Japan.

Russian audiences are enthusiastic to learn. There are often some people practising in the room next to the stage. They will improve.

If we bring some of these excellent performers and lecturers to Taiwan, can they impact the local scene, and sow some seed that may bloom later?

Was it what Vlada had in mind when she organised the event? I told her that she did a great thing that will be beneficial to the local community. Vlada calmly replied, “I did it, simply because I like it.”

That night Dave talked to me a lot. From shibari, to art, and to life. Then he paused, “I’m sorry. I am talking too much.”

Months ago Stefano made the same apology to me after talking about ropes. I saw the same thing in their eyes: the kind of passion in the eyes of those who talking about something they deeply love. My response was the same: I thanked them, for teaching me so much.

Each time I talked to Dave, I feel enlightened. And each time I saw Jack and Zahara on stage, I feel joy. Since the first time I saw them on stage, they have always surprised me with different ways they can perform, yet show the same love and intimacy. With their permission, I taped their last performance in Moscow Knot to bring back to Taiwan, which can be very good tutorial.

I am happy among these friends, who share the same love and passion. How lucky I am to be with these wonderful people.