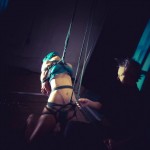 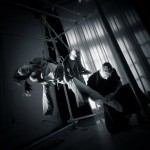 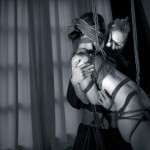 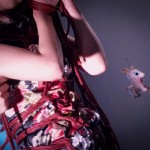 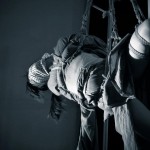 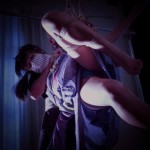 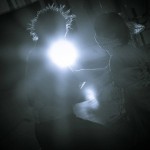 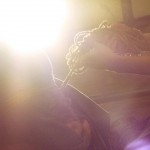 回程我與南西討論著其他表演形式，也談到劇團的分工等等。與魏老師聊過後覺得多了很多可能，也使我想要嘗試不同的事物。很感謝她的關心與期許，希望我們能變得更好。[:en]”I’ve got to leave soon, but let’s have some coffee and chat a bit some time!” When Ms. Ying-chuan Wei, a pioneer of the little theatre movement in Taiwan, said so after seeing our performance in Taipei Fringe Festival, I thought she was just being polite. Thus I was really surprised when I received her invitation several days later. “We theatre people keep our words!” said Nancy.

Besides the Fringe Festival, Ms. Wei also visited us in the Model Art Festival to take our photos, and attended our Halloween event where we performed with Bluevelvets and Sonic Deadhorse . “Like a flower blooming”, so she described how she sees tsuri. Indeed, the tension gradually built during the trying process and reaching its climax at the moment of “blooming” is, to me, the most fascinating thing to watch in a shibari show. Right on spot, Wei also raised the key question, “but then what? How do you make the untying equally full of surprises?” That is indeed a challenge for all performers.

That was indeed what we were worrying about too. Nancy and I explained how we started from imitating SM performances in Japanese happening bars, to our own private shows for friends, and eventually evolving into the current style, and that we are still working on the next step. Wei patiently listened to us. Without enforcing too much of her opinions, she lead us to think, and gradually many ideas came up.

Work-wise and shibari-wise, I tend to be the type who strictly follow the footsteps of the pioneers. I was in fact dismayed when I was asked in a number of occasions that, besides imitating the Japanese style, do we have something local? I often equate such doubts to the kind of populist nationalism I resent. While discussing with Wei, however, one possibility occurred to me: without SM bars, where Japanese shibari performances often take place, shows in Taiwan have to cooperate with the theatre, or with music events. Could that help to evolve our own style of performance, to the point that the Taiwanese deficiency of not having an SM bar could turn out to be a blessing?

After talking with Wei, many alternatives now appear possible. We are very grateful for her care and her high expectation, which inspire us to improve ourselves.[:ja][:]